Five Ways to Know if You Are a Cat Lover or Dog Lover? 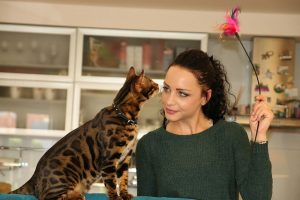 It’s amazing how pet owners oftentimes are clearly cat lovers or dog lovers and, although each can tout the
reasons why their preferred species is superior, there may never be a clear winner.

Science demonstrates that both cats and dogs can provide health and social benefits to humans – and both cat owners and dog owners are quick to tell you how much their preferred pet improves their happiness and quality of life. But science tells us there are some unique benefits that come with cats. Here are some reasons why cat people prefer felines.

1. Intelligence is higher in cat people
Researchers from Carroll University in Wisconsin completed a study on the personality differences
between people who said they were “cat people” versus “dog people.” This study suggests that the type of
people who have personalities that are attracted to cats more likely score higher on intelligence. This result
could be related to the study’s other findings, which indicated that cat people are more introverted, more
open-minded, and more likely to be nonconformists rather than rule-followers.

3. Owning a cat may reduce risk of dying from a heart attack.
A study conducted by researchers from the University of Minnesota showed that people who owned cats were nearly 40% less likely to die of a heart attack than those who had never owned a cat. Numerous studies have suggested that pets, including cats, dogs, and other animals, can reduce stress in their human companions. In fact, pet therapy is now a popular treatment for the sick and the elderly.

4. Cats are less slobbery than dogs.
Studies show that cats are much more efficient than dogs when drinking water. Cats delicately dip their tongues into the water with a force up to twice that of gravity, neatly pulling up a column of liquid to swallow while dogs smash their tongues into the water’s surface with a force up to eight times that of gravity, splashing and causing a mess.

5. Cats are cheaper than dogs.
According to the ASPCA, owning a cat instead of a dog could save you a minimum of $300 to $800 a year—maybe even more. Dogs are bigger than cats, on average, and are likely to run up higher food bills as a result. They also tend to require more toys, supplies, and services than cats, including crates, leashes, collars, and training classes. Routine veterinary expenses tend to be higher for dogs than for cats. And these figures don’t even factor in expenses such as boarding or dog-walking when the pet owners are away, expenses which are often bigger for dogs than for cats.